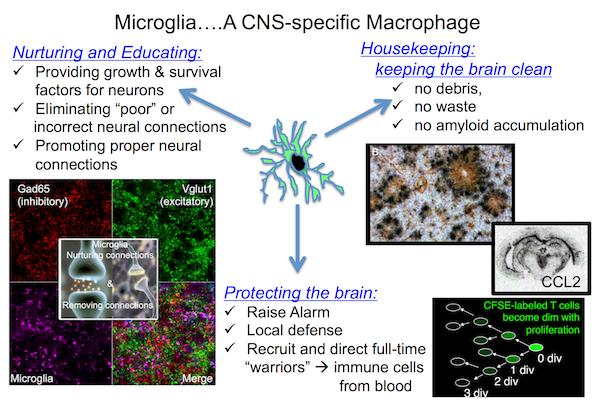 Microglia as Biosensors and Bioeffectors of Brain Health and Disease

As the tissue macrophage of the brain and spinal cord, microglia are highly plastic cells whose phenotype and function are determined by homeostatic and pathologic cues in their environment. Thus, microglia phenotype and function is heterogenous throughout the CNS and specialized to support the function of their local region. Because microglia are specialized to monitor and respond to even subtle changes in brain activity, we find that characterizing microglial responses within the intact brain is a sensitive method to detect changes in brain function that are not readily detected by other methods. We are currently working with clinical collaborators to explore how such approaches could be translated in clinical settings to detect brain injuries such as mild to moderate concussions that are often difficult to detect by conventional methodologies.

Until recently, the role of microglia in brain function was thought primarily to revolve around pathogen defense and tissue repair following injury or infection. Now it is realized that microglia also play fundamental roles in the normal development and maintenance of the brain's neuroinformation circuit including synapse maturation. Indeed, mutations and/or defects in regulation of microglial expressed genes are now recognized to have profound consequences for cognition and brain function.

We integrate both molecular and systems based approaches to define microglial contributions toward onset, progression and severity of classic neurologic and neurodegenerative diseases as well as to identify molecules and pathways that could be targeted therapeutically. Specifically, as part of discovery-based and hypothesis-based approaches, we use in vivo, ex vivo and in vitro model systems as well as human IPSC-derived microglia from individuals with and without mutations in microglial expressed genes. By contrasting microglial responses across the lifespan, we seek to define clinically relevant measures of microglial responses predictive of age-dependent risk and age-specific consequences contributing to poor progression following infection, traumatic brain injury and environmental exposure.

In aggregate, we find that microglial phenotype and function changes with life stage (infancy, puberty, early versus late adulthood) the environment (exposure to natural and man-made inhaled toxins), history of systemic infection and Injury. Therefore, the consequences of insults toward (and therapies for) susceptibility to neurodegeneration and cognitive disorders are also dependent on the age of exposure to insult.