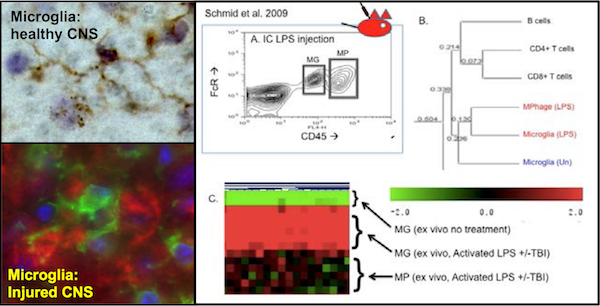 Examining how the brain and blood play well together (or don't!) in brain health and disease

Microglia as a CNS-specific macrophage

Using both open and closed gene expression profiling methodologies, we have defined microglial-enriched patterns of gene expression.  The Triggering Receptor Expressed on Myeloid cells-2 (TREM2) was amongst the molecules found enriched on microglia in vivo and acutely ex vivo.  We are using short term co-culture studies to define the neuroprotective, neuro-regulatory and neurotoxic functions of TREM2 expressing microglia (MG) as compared to acutely infiltrating blood-derived myeloid cells (MP). Taken altogether our studies are defining gene expression profiles and functions that are cell type-, age- and prior activation state-specific.  In conjunction with Dr. Blurton-Jones (UCI), we are testing the extent that data derived from model systems applies to the human condition using IPSC-derived microglia-like cells with and without mutations in TREM2.

Systemic Inflammation and the Effects on Neurodevelopment and Aging

Infancy and childhood are by definition times of first exposures to many pathogenic insults.  We are testing how systemic inflammation triggers microglial activaton and influx of blood derived leukocytes into the CNS.  In brief, we find region- specific and age-specific effects on synaptic maturation and neurotoxicity that contribute to age specific risk and age specific severity of neurodegenerative disease.

We are testing how microglial activation prior to TBI affects lesion progression and long term histologic and behavioral outcomes.  Surprisingly, we find that some forms of pre-activation induced by systemic inflammation actually decrease neurodestructive edema caused by TBI.  Using conditional microglia-specific knock-out models, we are testing the contributions of specific pro- and anti-inflammatory pathways in TBI pathology and resolution.

The inflammatory effects of inhaled toxicants

We have previously demonstrated that systemic inflammation regulates microglial phenotype  including neurotoxicity and age-specific and target-specific phagocytosis. Therefore, we are defining neuroinflammatory responses and microglial activation caused by inhaled allergy inducing antigens and man-made toxicants. We find that 5 days exposure to allergy inducing fungal antigens causing pulmonary inflammation is sufficient to cause brain region specific microglial activation and macrophage influx.  We are now testing age-specific and functional consequences of these changes.  Our data are beginning to demonstrate the mechanisms by which environmental exposures moderate brain development and increase susceptiblity to neurodegenerative disease.

To define microglial-specific functions as CNS antigen-presenting cells, we are contrasting a well established model of autoimmune diabetes with a newly developed model of autoimmune epilepsy.  In both these models, the target antigen (HA) is expressed on either the insulin producing cells of the pancreas or CNS astrocytes. In both of these models disease onset is dependent on the presence of CD4 T cells transgenically engineered to express a T cell receptor specific for the SFE peptide of the PR8 strain of influenza hemagglutinin (HA).  As expected, we find that there is a lower threshold to initiate autoimmunity in the pancreas than in the CNS.  However, in aggregate our studies to date illustrate that an autoimmune attack on astrocytes is sufficient to trigger T cell dependent seizures. These data suggest that though epilepsy therapeutics traditionally target neurons, therapies targeting astrocytes and/or inflammation may be beneficial in the 1/3 of patients non-responsive to traditional seizure therapies.